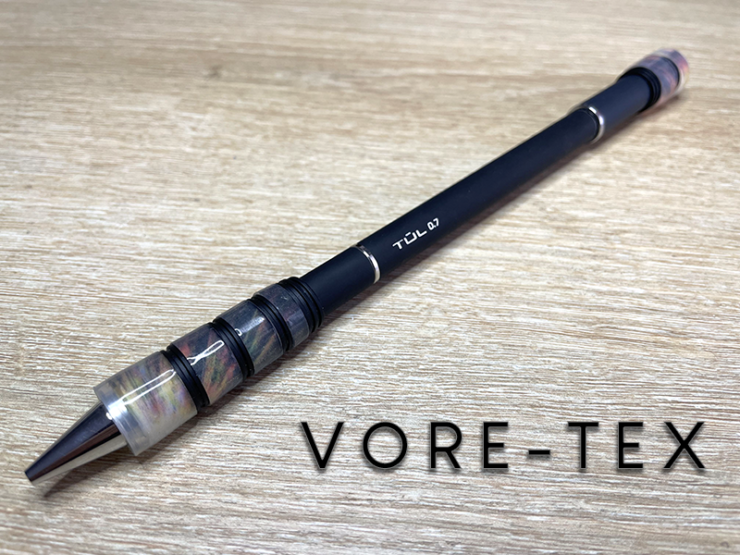 Astronomers collaborated with renowned Hawaiian language and cultural practitioner Dr. Larry Kimura for the Hawaiian naming of the supermassive black hole at the centre of the galaxy M87. Pōwehi, meaning embellished dark source of unending creation, is a name sourced from the Kumulipo, the primordial chant describing the creation of the Hawaiian universe. Pō, profound dark source of unending creation, is a concept emphasized and repeated in the Kumulipo, while wehi, or wehiwehi, honored with embellishments, is one of many descriptions of pō in the chant.

I’ve recently got the idea about making a full rough Firefly G3 mod, where colors are located only below grips. Because the concept of the original firefly G3 mod is a full colored mod, means that the light goes through literally everywhere on the mod, my concept sounds similar to a black hole : the light only focused on the extremities of the object and nothing at the center. Just black.

Pōwehi is the name given to this mod, which is also the name of the black hole we’ve all seen 2 years ago

A newer image was released this year :

I’ve noticed lately that I never share the process of making mods with you. Even if showing off my creations is important for me, sharing my knoweldge should be more. Below is how I did :

1- I immediately knew which pens I was going to use as foundation : TUL for the bodies and muji gel for the cap.

I think everyone knows what TUL are. American gel and mechanical pencil. The ones used here are the mech. Available in a lot of colors, I chose black for Pōwehi :

The cap is mate color and a bit rough (available in mintgreen, orange, pink, blue, red, black); It also has a small clip which is quite pretty.

2- Once the foundation prepared, I was looking for 2 metal rings in order to create a metal effect balance all through the mod (tip + metal ring + metal ring) :

I was pretty lucky for the metal ring at the back. This is from a Pilot G2 EX. Slightly smaller than airfit ring, G2 EX ring fits perfectly the Muji cap.

About the front metal ring, I had to think a bit more audaciously. Because I always think that nothing is impossible in penmodding, I decided to cut off a Drgrip metal ring with a jeweler saw. The tiny metal ring at the left of the picture is going to be used for Pōwehi :

3- Now all the visible aspects of the mod are chosen, let’s think about the connector. If you made a VGG/Ivan mod from stalogy pen already, you should know that the Aopo pen is used as connector. A sanded aopo pen is the perfect connector for linking two TUL bodies together.

I’ve initially used a G3 metal tip but i’ve changed it to a Needle point tip for a better balance. An RSVP grip. A very thin metal ring from a Tawainese mech pencil (his part is purely optional). Aopo body is 2.6cm longfrom the outside of the TUL body.

Since the cap is not wide enough (but almost the same length as G3 cap), it doesn’t go onto the TUL bodies. Thus, the complete mod is 0.5cm longer than the original Firefly G3.

Second attempt, with more details for the back : sailor grip and one piece of drgrip grip added. The clip was also removed.

This is for me the best aesthethic gripping I’ve found for the mod. A whole drgrip grip used, but 14 stripes of Sailor gel (original has less than 14)

6- The mod is very nice already, but doesn’t fit with the intention of Pōwehi.

I was looking for a very special insert, which represent the light movement next to a black hole. Last week I’ve found out this digital artist on the internet « FiveTimesNo » :

The picture that I decided to use :

I would loved to use photo paper in order to get the brighter effect but this means more thickness under the drgrip grip. This is why I decided to use regular printing paper for the insert, which makes a more mate and darker effect.

The final version, after 3 days of working on it. The inserts fits with the intention I’ve chose at the beginning, I am now satisfied with my new mod 🙂

Though, I am looking forward for seeing your versions with different inserts and color bodies ! I am sure it can look pretty good too.

Thank you for reading and see you next time !