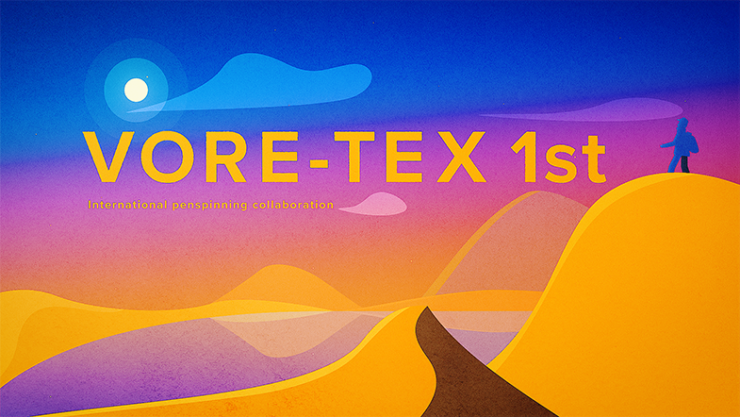 Credit to Lotus (Japanese community) for the drawing above

I decided to launch the organization of VORE-TEX 1st.

Instructions for FS were clear :
– mod used should be one of my creation or from my tutorial of my original mod
– Clean setup
– any horizontal ratio except 4/3 (better 18/9 in order to use spatial elements of the environment for editing integration)
– around 12-18sec long

The date of the first deadline. 6 spinners submitted a FS (4 of them had the skill to pass filtering). I was looking for 12 in order to make a decent CV.

I decided to contact individually 8 others spinners, which own one of my mods, or made one of them.

At the first, I thought I was organizing a X Incipiens Stabilus 2th. But over time, I realized that the mods used for VORE-TEX 1st were not created especially for the CV, but they mean to me a support from someone, a special opportunity, a story, a friendship or an unique encounter.

VORE-TEX 1st shows you my involvement for the penspinning community from these 4 lasts years.

The concept of layers in Penspinning CV

As an organizer and modder, I realised a CV is not only sharing how strong or how stylish a spinner is. A good CV should be a story to share, with differents layers of understanding;

One of the issue of X Incipiens Stabilus was to put all the details into the CV : who made the mods, why, for who, what does the mods look like, etc. Considering the large amount of info in a short period of time, understanding the concept of the whole CV and enjoying it as en entertainement was not an easy task.

« No quality without a payback »

Guessing many of you are expecting from me thinking that there is no quality without a payback. This is my bias since a lot of years. I thought about paying the spinners which passed the filtering, but I remembered that most of them were guests and also because I’ve thought about this idea once the DL have been passed. Hoping that I could pay the spinners (at least a bit) for VORE-TEX 2nd ! I think it could be interesting if this new category of CV can be developped !

Even if spinners of VORE-TEX 1st were not paid, the editor was. I understand and I am aware about the different issues of paying for a FS. If you are looking for some opinions, I advise you to read this tweet and see what people said about it (into the RTs and comments) :

I replied this thread by saying that I am fine to pay 50€ for a good FS if I am organizing an important CV. I remembered Mumm3y told me that I would need a lot of views on my final video in order to payback all the amount of money I spent for the project. In a sense, he is right. But, I want to give money to the actors of the CV as a way to tell them « Yes, your effort is not valueless. Be proud of being a penspinner, you are awesome ».

I respect people and their opinion when they think that they are playing penspinning « just for the fun ». I understand this point of view since I thought the same for a long time (for at least 5 years) when I started this hobby. However, my opinion about this topic is, if everyone is doing penspinning for fun without any payback (could be a physical prize or some money or anything else that non pser can understand as a payback) nobody would take seriously the hobby. On top of that, there is a lot of people want to keep the penspinning hobby in the dark. Are they afraid that their world is going to change too much ?

Keep penspinning in the dark ?

Penspinning, as any niche hobby, is a very closed world and a lot of people don’t want their world to be changed. I have the same feeling in the world of jewerly (I have a job in this field), which is very small and where everyone knows each others.

Organizing VORE-TEX 1st is a way for me to take seriously PS. I am proud of the final result of the CV 😊

As I said earlier in the blog post, I chose Lotus as the editor of the CV. Even if there were some modifications to do from the beginning to the end, the final result went beyond my expectations. The short movie at the beginning is absolutely breathtaking. I also love the very end of the CV with the arm of Beige, which put a bit of fun into the video.

I was looking for an editing with this theme, from isshin, a japanese motion designer :

And with this music

Because this blog post is also about mods of the CV and their origin, below are some quick explanations :

Tchus is using a VT KT, which is the same than the one he used for the VT KT CV

Kara-T-J is using a blue DC called « Renaissance », a penmod I made for him from his own preferences. I think this mod represents very well my speciality in penmodding : create personal mods for spinners better than their own personals.

Menowa’s and Iteza’s mods are born from encounters. Both at the same date, at the same place : I met both of them at an Osaka gathering at Bunshi Messe in 2018. The first time in my life that I met them.

Neir’da’s mod is a My-Gi light version (>original post<). He received this mod as a prize of the 2018 french penspinning tournament. I tried to make something similar to isuk energel st mod about weight distribution.

NZ’s and Coffeelucky mods are born from encounters, again. Nz’s one is about a promise : after I met him at Bangkok in 2019, I told him that I wanted to offer him a mod once I will be back home as a memory of our gathering.

Coffeelucky’s mod is a black Sunburst MX with a unknown front grip I received from a trade with Whizz (from Russia) in 2015.

Padrace is using a voretex watercolor mod. I chose him to be in the CV because he was the first person who support my watercolor mod project. Thank you for the support !

Seoli is in the CV because it is mostly about a friendship. A modder frienship. He is using a voretex comssa.

Akai’s mod is similar to Kara-T-J’s mod. Behind a bespoke gear is hiding a story of a collaboration between the user and the creator.

Gunter’s mod is his prize for being the winner of the 2019 french beginner tournament. He also joined the CV because he is a good friend of mine.

Once again, I spent a lot of time (a whole year this time) to release this CV. Even though the artistic direction was not clear from the beginning, I am still proud of the final result.

Any feedback (commenting, linking, sharing) would be greatly appreciated 😊

Thank you for reading !